Wednesday I received a phone call from the son of a pen pal I had over fifty years ago.
A catholic magazine called Extension asked people to write to servicemen. I wrote to a few and most didn't respond for any length of time but one fellow wrote to me for several years. It was mostly nonsense on my part. My letters were about attending music classes at S.U. working at the Pike Place Market etc. Nothing serious. He had my handwriting analyzed and decided I was an intellectual scatterbrain.
I received a post card this week with his phone number and address.  I won't phone him but would like to hear how he and his family are doing.  It will be interesting. His first wife passed away quite a few years ago and he remarried. At this time we quit sending our annual Christmas card.

Thanksgiving was fun with our family at Elizabeth, John and Zoe's home. It was also our anniversary so it was twice as much fun.

It was good to get back to choir today. The music was beautiful. Howard was especially good.

Our neighbors Chin, Michele and Kenny were planning on stopping by for lunch. Zoe and Liz also stopped by as Zoe is doing some artwork for us.  Liz and Michele seem to get along well. They are certainly closer to the same age. Kenny was a good kid and played a piece on the piano. He is an excellent pianist.

We finally figured out how to handle the parking problem for  the installation of the new Archbishop. Joe will drop me off at church and June and Roger will bring me home and stay for dinner.

View From Our Deck 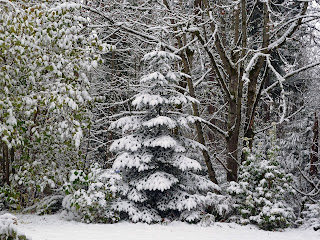 No Christmas decoration can surpass the beauty of nature.
Posted by Marta at 3:15 PM 2 comments:

Enjoying our Grandchildren and Feeding the Choristers 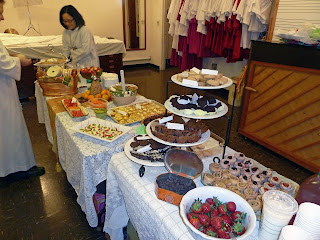 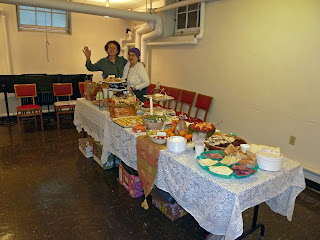 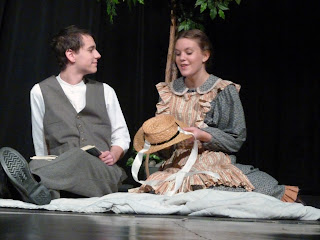 We had fun three days in a row. I'm not sure I can handle it.

Friday we drove to Olympia to have a delicious dinner with family before driving to Tumwater High School to see a performance of "Little Women". Our Grandson Ian played the part of the Mr. Brooke. It was very entertaining. Mr. Brooke falls in love with Meg and a sweet kiss ensues. They get married and  have twins so I felt like a Great-grandmother for an hour or so. It was wonderful and no work involved.


Saturday we braved the elements and attended our Granddaughters soccer game. Sami is a very good soccer player and seems to get better each time we see her. It was extremely cold and Joe was headed for the truck when he saw our Grandson Alex and his mother Kelley. It was great to see them and visiting with them kept us warm.  Alex and Sami will be attending Kennedy Catholic High School. It was a difficult decision made easier by the price of tuition.
Our son John has coached the girls soccer team for 10 years.  He  does a great job without going completely crazy. There are coaches who go a little nutty.  I've witnessed a few.

They won the game and we arrived home without frostbite. It was too cold to take off our gloves to take a photo. They won district championship on Sunday. More games?


Today Joe helped me set up the treats for St. James Choir. It was fun.  Gloria was my partner and that's always interesting. Everyone seemed to enjoy the food and that makes it all worthwhile.
The most noticeable objects in the photo are the boxes hiding under the table.

Music was great today. I always enjoy being part of our extraordinary choir, but today was special.  I felt we were helping an artist paint a masterpiece.
Posted by Marta at 6:47 PM 2 comments: 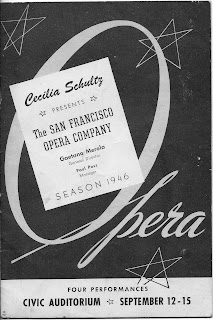 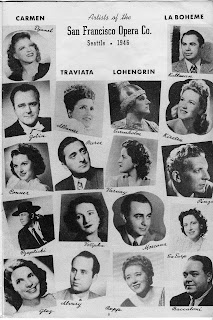 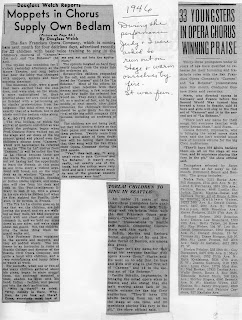 Before the  Seattle Opera existed,the San Francisco Opera would come to Seattle to perform.
If the Opera included a childrens chorus, each city would hold  auditions.
My Aunt Bena lived in West Seattle and was more in tune with what was happening in Seattle. She informed  my mom of the auditions for childrens chorus and thought we should try.


On the appointed day,we walked down the road to flag down the Greyhound bus to Seattle. It was rather exciting as we lived in Earlington Flats ( between Renton and Kent) and didn't get to Seattle very often.( We had one big trip a year to buy school shoes.)
The ages were supposed to be 12 and under but kids of all ages showed up for the audition. My sisters Barbara and Judy were with me.
When we arrived at the audition hall there were young people practicing  arias. After hearing these experienced singers we didn't know what to think. Luckily, the conductor was interested in children with good pitch. We sang la, la, la to one of the songs from La Boheme.  We all passed.  Some of the children who auditioned were so cute but singing was not their thing so Gustav Stern had to send them home.
The costumes were for children 12 and under so my sister Barbara (age 14) didn't get to sing in the chorus. She was asked to be a super along with the snooty kids who were singing arias.
It was great fun and most of the stars were nice to us. Ezio Pinza was not one of them.
Judy and I were asked to do something extra and we felt really special. We had to run on stage to the fire and warm our hands.
We were in" Carmen" and " La Boheme". We learned to sing one song in Italian and one in French. It was a wonderful experience.
At the end of one of the performances of "Carmen" the man with the cart full of toys let us take some home forgetting  there were other performances. Another man came out yelling at us so we put most of them back. I have one in my cedar chest.
We were given tickets to the show so our parents could attend. Judy and I have matching dresses. Barbara is to the right of Mr. Stern. She's wearing a scarf on her head.Judy has a bow in her hair.
. 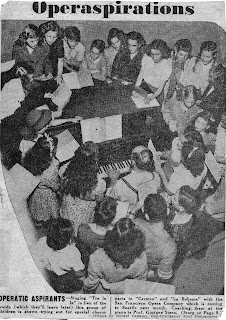 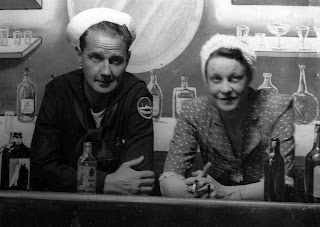 Uncle Art died while preparing a birthday dinner for his sister Mary. It would seem a good way to go....doing something nice for your sister. However, it was difficult for Aunt Mary as she arrived at the house to enjoy  a meal and found her brother, on the floor, no longer with us.
This situation helped me decide that I should help her get through this.. I cleaned his apartment, packed up his belongings and whatever else she asked of me. The whatever else was the tough part. Not that the cleaning was pleasant but when she asked for help disposing of his ashes.......
Aunt Mary was very disturbed for many reasons..she was still in mourning for my Dad  (her brother), very upset at finding the body, against cremation, but he had requested it legally so she had to go ahead with it.  When Mary was finished with all the legalities, we still had the problem of what to do with the ashes.  Mary did not want to keep them( I suggested she save them & bury them with her). The look on her face was one of shock that I would suggest such a thing. Then I suggested sprinkling them on the water since Uncle Art had been a Merchant Marine for many years. ( I remember his tales of being a cook on a ship and especially the story about cockroaches running around the rim of the soup pot).  Mary did not like that suggestion. She seemed to need the security of knowing where the ashes were located and still comply with Uncle Art's wishes.
Finally I suggested my brothers, my mothers, or our property and ours was chosen.
I pointed out the areas that were left in the natural state, not bothered by digging ,weeding, the bulldozer etc.  I drove to her home, picked up Art's ashes, drove to Art's Apartment to pick up the ashes of Aunt Frances ( which had been on the window sill for five years) stopped by Mom's to pick her up and on to MacKenzie's Acres.
Earlier that day I had been laughing nervously at the situation, then had to stop and tell myself how much this meant to Aunt Mary. I decided to buy a few plants to color the area that she had chosen.

Mother was a real trouper, stomping through the area to be the head sprinkler. The ashes were like gravel as the bone does not burn but is semi-pulverized.
Mary spoke to each of them and said her goodbyes, we said the Lord's Prayer together and then I sang the beginning of " In Paradisum"  " May the angels lead you into paradise, may the martyrs come to welcome you, and bring you to the holy city, the new and eternal Jerusalem."
It was a beautiful day, the sun was shining on the ferns and after all my giddiness, I thought to myself, what a peaceful way to go. I felt very good inside and for a moment wished that Dad was also in our woods.

It is difficult to know what Uncle Art and Dad thought of the event...knowing those two they probably had a good belly laugh and then shed a few tears.

A few months later I drove Aunt Mary home after a family dinner...she started to open the door and then said,  "Martha, how are Aunt Frances and Uncle art doing?"      I was a little startled by the question but answered, " Just fine, Aunt Mary, just fine."
Posted by Marta at 2:54 PM 2 comments:

Last of the Fall Color 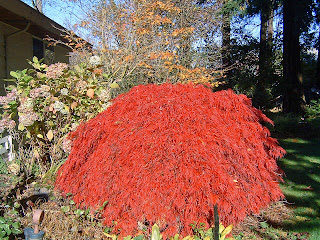 The leaves are vacating the premises.  The Japanese Maple is the last to go so let's enjoy its brilliance.
Posted by Marta at 2:05 PM No comments:

Marta
Married for many years to a wonderful man. Sing in great choir at St. James Cathedral. Enjoy our six children & their families.